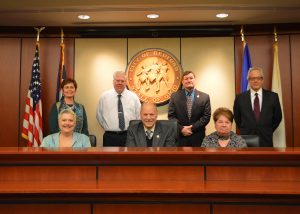 City Council is a legislative body of six Council members that serve the residents in their respective Wards 1-6. The Mayor is a ceremonial position and is considered the Council President who presides over the meetings and also an At-large position who oversees Wards 1-6.

The qualifications of each member of Council, for at least six months (6 mos.) immediately prior to his election, shall have been a resident of the Municipality, and shall also have been a resident of his ward for at least six months (6 mos.) prior to his election or appointment. During such six month (6 mo.) period prior to such election or appointment and during his term in office he shall continue to be a resident of the ward from which he was elected or appointed, and shall have had and continue to have the qualifications of an elector thereof. He shall not hold any other public office except that of Notary Public or member of the State Militia.

Council meetings are at 8:00 p.m., on the second day of January following a regular Municipal election, or if such day be Sunday, in the day following, Council shall meet at the usual place for holding such meetings for the purpose of organization. Thereafter, Council shall meet at such times as may be prescribed by ordinance or resolution, except that it shall hold regular at least twice during each calendar month, except June, July and August, when one (1) regular meeting only is required. All Regular Meetings, Work Sessions and Special Meetings of the Council at which any legislative action is discussed or taken, shall be open to the public. Any resident of Bedford shall be entitled to speak at such meetings of the Council. Such right shall not be unreasonably abridged by any rules and regulations which Council may adopt.

Council shall, at the time of organizing and every two years (2 yrs.) thereafter, elect one (1) of its members who shall have the title of Vice-Mayor. The Mayor shall preside at all meetings of Council and shall have a voice and a vote in its proceedings, but no veto. Except as the same are otherwise disposed of or provided for herein, he shall exercise all the powers and discharge all the duties imposed upon mayors of municipalities by the general laws of the State of Ohio, which are not inconsistent with the provisions of the Charter, but nothing herein provided shall be construed as conferring upon him any administrative functions herein conferred upon other officers. The Mayor shall be recognized as the official head of the Municipality for all ceremonial purposes. The Vice-Mayor shall have all the powers herein conferred upon the Mayor. In the absence or incapacity of the Mayor and the Vice-Mayor, a majority of Council may appoint an acting Mayor.